It seems after every pro show bodybuilding message boards light up with accusations of guys getting robbed or there's a huge conspiracy of sponsors paying the judges. Most of the statements are made by guys viewing the photos posted immediately during or after the judging. By viewing those photos guys make up their minds by judging the show for themselves only by looking at the photos. I do the same thing when I can't make it to one of the shows, but I do know there is another apsect of judging than just looking at photos.

If you've never been to a pro bodybuilding show in person, you can't know the difference because you've not seen it for yourself. In my review of the Flex Pro I wrote for Bodybuilding.com last weekend, I analyzed why Evan placed ahead of Dexter. I explained it like this:

Why Evan Won
It’s not always obvious when looking at the photos posted online after a pro bodybuilding show, but it’s easier to see how decisions are made by judges when you are actually at the event and you’re watching and analyzing it. There’s a 3-D element that is always lost in photos. You can see the depth and hardness of a physique or how a muscle looks as it’s moving. These are huge factors that photos cannot capture.
When Evan was standing on stage, your eyes would be drawn to him more than the other competitors. His arms look huge in photos, but when you see those arms move and see them from various angles as he turns on stage, you really get an idea of how big Evan’s arms are. I know the emcee of the Flex Pro, Bob C., has said, “You can never have too much money and your arms can never be too big,” but Evan’s are almost too big. They are like Phil Heath’s when he’s on stage; they are just bigger than everyone else’s arms.
Like I said earlier, Evan was a lot bigger than Dexter and he plain old out-massed him. Cutler has done a good job of out-massing Dexter, but Jay is a couple inches shorter than Evan and so Dexter looked much smaller because of Evan’s height. It didn’t help that Foaud, Wolf and Evan were in the same group as Dexter and that made Jackson look even smaller.
If Dexter would have come in with his classic conditioning, he might have pulled this one  off and chalked up another win. Dexter’s combination of decent size, shape and proportion will win only if he combines it with that incredible conditioning. When that’s gone, Dexter looks aesthetic, but your eyes are not drawn to him as much. Evan had the conditioning combined with extraordinary mass and your eyes were drawn to him instead of Dexter.

Well, that's a brief explanation of how judging a show live is different than looking at photos online. There's still more involved, but I'll get into that in aother post.

Will Branch Win It?

The biggest news for this year’s Arnold Classic, before Evan won the Flex Pro, was that neither Kai Greene or Phil Heath will be in the show. Both athletes have decided to bypass it and concentrate on the Mr. Olympia in September of this year. Kai Greene won the 2009 and 2010 Arnold Classics and Phil Heath placed an unforgettable and controversial second last year. With those two absent, it opens up the possibility for a new champion to be crowned. Or a former champ could reclaim the title. Anyway you look at it, a great show is in the making.
Posted by Myron at 10:43 AM No comments:

Evan Centopani won the 2011 Flex Pro Show, which  kicked off  the IFBB pro season on Saturday. It was his second pro contest and his second win. 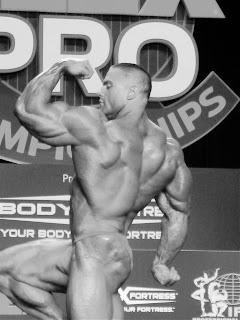 The inaugural 2011 IFBB Flex Pro Championships will be held this Saturday, February 19 in Santa Monica, CA. I'll be there covering the show for Bodybuilding.com. Dennis Wolf will be competing along with Dexter Jackson and Evan Centopani. 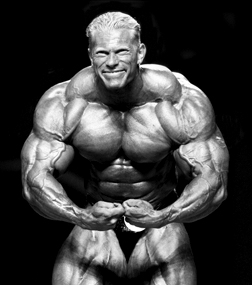