This Saturday, May 25, 2013 is the IFBB New York Pro. It has both the men's open and 212 divisions. This event has a few things that are actually cool when it comes to pro bodybuilding competitions.

Cool thing number one:
Victor Martinez makes his return to the stage in New York. After winning the 20ll Arnold Classic in Europe, Victor ran into some immigration problems upon his return to the US. He's originally from the Dominican Republic and his papers weren't in order for international travel. He ended up six months in jail waiting for things to be resolved. After his release in April of 2012 he broke his arm a few months later during an impromptu arm wrestling match. After months of healing, he is back and ready to stand on stage again. He won the New York show about 10 years ago and it was one of the best showings he's ever had. Will he win this year? I have no idea. I don't know what he looks like. We most likely won't see the 2003 version of Victor, but he might be just good enough to win... maybe.

Cool thing number two:
Mamdouh Big Ramy Elssbiay from Kuwait is making his pro debut. New guys make pro debuts all the time. They get their feet wet and if they make the top 10, it's considered an achievement. Some guys, like Evan Centopani for instance, have won the NY Pro in their debut.
Here's the thing with Ramy, though. He's only been training about three years and he won his pro card at the Amateur Olympia last fall. That win qualified him to compete in the Mr. Olympia in Las Vegas. All that is impressive in itself, but the guy is HUGE! He's five feet 10 and weighed 298 at 10 days out from the NY Pro. If he is conditioned enough, he might actually win the show. It's a possibility. Take a look at the dude here: http://www.flexonline.com/ifbb/ifbb-new-york-pro-2013/mamdouh-big-ramy-elssbiay-days-2013-ny-pro

Cool thing number three:
Aaron Clark is also making his pro debut too. He is in superb condition and decided to drop a couple more pounds and do the 212 instead of the men's open class. Aaron will be up against Mark Dugdale, Jose Raymond, Sami the Blacksmith and more. It'll be very interesting to see how he stacks up against some of the IFBBs best in the 212. 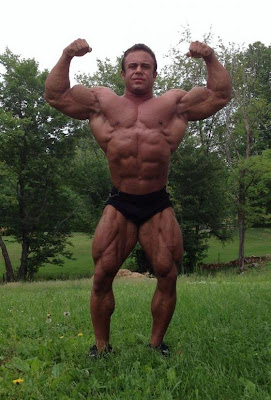 Two things: people don't like to be told what to wear or what to eat.

Company dress codes are a good example of the first point. Dress codes do have their place, but when a small company tries to impose rules like they are a big company, people do not like it. Or if the code is out of touch with the actual work that is done, people become disgruntled.

For example, years ago I worked at a company that designed and produced phone books. It didn't pay much but I didn't mind working there. It was a good group of people to work with. Most hated the dress code, though. We were an art department that needed to dress up every day. Ties were not required but slacks, dress shoes, polos or collared shirts were required. No jeans or sneakers. As an art department we hated it.

The vice-president of personnel established a panel of people (the dress code police) to help decide what articles of clothing was appropriate and what wasn't. As you can guess they were not a very popular group in the company. Most of the panel were hand-picked and were the people wishing the code would be even stricter. Needless to say, the panel became the joke of the company and a strong attitude of "no one's going to tell me what to wear!" became the norm.

The second thing people don't like is to be told what to eat. "Eat your beans!" "Finish your vegetables! They are GOOD for you!" What's that you say? Your mom said these commands to you? How did I know? I'm psychic like Shawn Spencer.

So the lady in the Production Dept. in your company who scolds her co-workers for eating various types of food, isn't well liked because people don't want to be told what to eat.

It's not only in the workplace or at social gatherings that people scold others for what they eat. Oh no! Facebook has opened the door to allow people to post their diets and photos of all the healthy food they eat -- and, of course, what everyone else should be eating too!

I discovered years ago when I was in high school that my classmates really didn't care what vitamins or minerals were in certain foods or which foods were best to consume after a sports practice. They also didn't care how many calories, carbs or fats are in particular foods. After a few comments that they didn't care, I took the hint and shut my mouth.

Those people are now adults and I can say confidently that they do not want someone scolding them like their mother about what they shouldn't eat. I've seen the "mothers" out there scolding adults and it is never received well.

Why is it then that fitness-oriented or recently-converted-health-nut people think they have to fill their Facebook timelines and albums with photos of what they eat everyday? Or let people know they are working hard to achieve their fitness goals and you should too? Or how horrible aspartame is? Or how bad non-organic food is? Or what you need to eat so you don't get cancer? Or you shouldn't chew gum? Or you shouldn't eat meat?

Honestly, it does little to motivate me when I see someone telling others what to eat when those others haven't ASKED the person what to eat. I think eating healthy is important, of course, but it needs to encouraged. Scolding never works. Sorry, it just doesn't. It only makes the scoldee upset and the scolder looks like one of those stereotypical arrogant fitness or health nuts. (You know the type.)

Lead by example. Do your thing. Eat your food. Do your workouts, but always keep in mind that the other person probably doesn't want to be a CrossFit champ or a Mr. America. Or the next paleo vegan. If they do, they'll ask you for help and advice. Until then, my fitness-nut brothers and sisters, carefully consider what you post on social networks or what you say about what YOU think others should do when it comes to eating and exercise.

And for crying out loud, don't tell them how they should dress either!
Posted by Myron at 10:54 AM No comments: