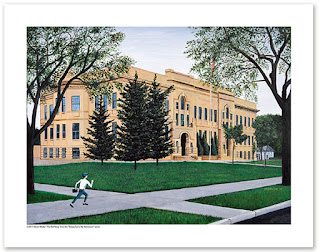 I'm excited for the release of my next print in "Sleepy Eye's My Hometown" series. The first one was titled "Mid-Morning at St. Mary's" and featured St. Mary's Church, a landmark of Sleepy Eye for more than 100 years.

My second print is titled "The Bell Rang" and it is of the old Public Elementary School, which was built in the late 1800s in Sleepy Eye. In 1976, when I was in third grade, the building was condemned because of a cracked i-beam in the roof. With three weeks to go in the school year, the school board made a decision for the safety of the students, to end the school year. Summer vacation came early that year.

In the mid 1980s, after years of being vacant and rumors that someone was going to buy it and renovate it, the old school was torn down. I remember watching part of the demolition. It was a sad day for me. Lots of childhood memories were relived and the chance of ever touring that old building were gone.

Fast forward thirty-some years and I began doing research and gathering reference photos of that old building. My desire was to create a nostalgic piece that all the kids who went to that school might appreciate. And it also would combine a couple ideas from one of my favorite Christmas movies, "A Christmas Story."

The concept was to capture the moment after the bell rang, the students had lined up and already filed into the school. And there's one straggler who, for whatever reason, is picking up the pace in order not to be marked too late.

That bell is now on display in front of the current elementary school.

The other thing I wanted to have on the painting was the flag pole. (You know, the triple-dog-dare and the tongue frozen to the pole scene?)

Well, one thing I wanted to do at the old school was to be one of the kids who got to fly the flag in the mornings. That honor was reserved for the sixth graders. And since the school closed when I was in third grade, that was something I never had the opportunity to do.

While working on the painting, I was flooded with so many memories from that old school and it was overwhelming at times. Christmas programs, the gym floor that almost bounced like a trampoline, the multi-level restrooms, radiators that clanked, the library on the second floor, the Spider Web, and the fire escapes. Just to name a few.

I know many of us would love to somehow take a tour of that building and explore it. For anyone who attended that school, however, all we have is our memories. I hope "The Bell Rang" brings back many pleasant memories for anyone who purchases a print.

It is exclusively available at Twice as Nice Coffee Shop in Sleepy Eye, MN.
Posted by Myron at 10:25 AM